The sound of the iconic Huey helicopter is unmistakable to a Vietnam veteran. The rhythmic thumping of the rotors is hypnotic and often takes vets back in time to when they served during the Vietnam War.”In Vietnam, almost every veteran has a story to tell about a Huey,” said Jim Haga, president of Liberty War Birds, a nonprofit based in the Lititz, PA. The Vietnam veteran believes reuniting his fellow vets with the Huey could be cathartic. Just getting back into a helicopter, albeit not a Huey at the time, and flying again helped Haga who struggled with late onset PTSD. That’s why he founded Liberty War Birds. “I realized there was an opportunity there to help other vets connect with the aircraft. It might be healing for some of them, but it’s always a choice.

I just wanted to give them the opportunity. That’s what Liberty War Birds is all about, trying to get this aircraft in front of veterans, in a sense to give them the opportunity to reconnect and to just honor them.” Two years ago, the nonprofit scraped together $250,000 in donations to buy a Huey. The aircraft’s serial number was 66-16823. The first two numbers indicate when the helicopter was built, 1966. 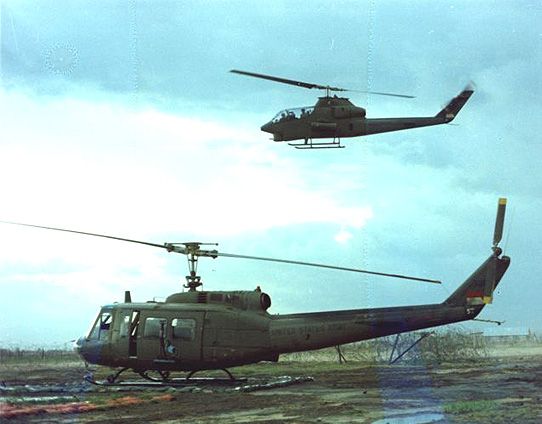 Since Liberty War Birds acquired Huey 823, as she’s called, about a dozen dedicated volunteers come to a hangar at the Lancaster Airport every weekend to rebuild her. The majority of those volunteers are Vietnam War vets. “It’s like a kid with a big train set,” said volunteer Steve Rosinski, who served as a crew chief in a Huey in Vietnam. “So when you can get to work on one of these things it’s neat.

It’s just fun.” But Haga said he and his volunteers are doing more than just fixing up 823’s paint. “Right now what we’re doing is restoring a Vietnam veteran UH-1H helicopter to flight status. It’s not going to be a static display, we’re going to get it flying again,” Haga said. PTSD therapist and Vietnam veteran Alexis Lake volunteers her time with Liberty War Birds and also serves as the vice president of maintenance. Lake said she has witnessed the powerful emotions and connection vets feel when they touch or sit in the 823. “Remember that when Vietnam vets came home, we were told, don’t tell your stories. Everybody said, ‘Get out of your uniforms, get into civilians,’ because the population in America at the time took out their angst about the Vietnam War on the troops,” Lake said.