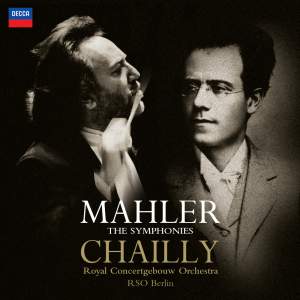 The Decca / Deutsche Grammophon catalogue of Mahler recordings is unsurpassable. Their major contribution to the 150th anniversary celebrations this year will be the first-ever Mahler Complete Edition, a combined effort of Decca and Deutsche Grammophon recordings as an 18-CD superbudget box, with the ten symphonies, Das Lied von der Erde, Das klagende Lied, the song cycles, the Knaben Wunderhorn songs and early works — in benchmark recordings by a great assembly of Mahler conductors, singers and orchestras. Reviews of some of the orginial recordings which make up this set. Symphony no 5 'Bernstein, who related strongly to Mahler’s angst, demonstrated a visceral empathy with his music.

His live Deutsche Grammophon recording of Mahler's Symphony No. 5, conducting the Vienna Philharmonic just a few years before his death in 1990, illustrates the power of his Romantic, emotive approach. Bernstein harnessed the impeccable technique and glorious sound of the Vienna musicians in a performance full of demonic excitement, sweeping tragedy and blazing climaxes, with the velvet sound of the strings used to poignant effect in the famous Adagietto.' --Vivien Schweitzer, New York Times Symphony no 4 'Pierre Boulez takes a fresh approach to Mahler's much-recorded Fourth Symphony. Eschewing the received Mahlerian style, Boulez instead views this echt-18th century work composed at the close of the 19th from the perspective of our 20th century embarking on the 21st, thus infusing this reading with modern sensibility. Don't expect the usual accelerandos and ritardandos; sentimentality for its own sake is not the Boulez way. Instead he sees entire movements as whole entities and plans his tempo relationships, and rubato, to fit his conception.

This approach is most convincing in the first movement where the quick gait draws us immediately into Mahler's magical world. The lyrical second subject, usually elegant and genteel, here flows like a cool stream. Boulez's carefully rationed rubato is employed to round off a phrase rather than expand it. In the development the impetuous pulse presses ever forward, letting nothing get in its way, and builds to a frenzied, brightly-lit climax, one of the best on record. The Cleveland Orchestra's buoyant, crystalline and clean-lined playing perfectly realises Boulez's intentions.' --Victor Carr, ClassicsToday.com Symphony no 9 'Karajan’s 1982 performance remains a remarkable one.there is nothing dispassionate about the way the Berlin Philharmonic tear into the Rondo-Burleske, the agogic touches of the analogue version ironed out without loss of intensity.In his broadly conceived, gloriously played Adagio the sepulchral hush is for once as memorable as the eruptive climax.

The finesse of the playing is of course unmatched.' -- Gramophone Das Knaben Wunderhorn 'From the first, rhythmically crisp trumpet fanfares, so skilfully imitated by Berlin woodwind later on, you know you are in the most vivid of hands. Abbado is right to trust the varied tone colours of his two singers to carry the many boy-girl dialogues single-handedly in each song, as Mahler always intended (and contrary to the practice of most other contenders). Von Otter plays the wench with just a hint of Strauss’s Octavian disguised as Mariandel, and none of the archness of a Schwarzkopf, while the desperation of ‘Das irdische Leben’ is carefully graded. And Quasthoff is as quietly witty in pointing up the rhythms and phrases of the fables as he is harrowing in the military doom-songs. -- BBC Music Magazine Works on This Recording.